What had started as an innocent attempt to get to know each other had somewhat resulted in a couple of young women trying to drown their fear and uncertainty about the future in a jug of mead.

It had all started here, in this castle Ailana decided the big fat mess that was her life.

Things had seemed much simpler when she was a child, when she thought she would grow up and marry some lord her father had arranged for her, have a few children and live happily ever after.

Now she was older things did not have a luxury of being so clear, her brother was too lazy and self absorbed to find her a husband and as such had ruined her life by using her to ruin a marriage he did not approve of.

She had in her naivety trusted and believed him when he’d said that being the mistress of a king was a noble and sort after position and now it made her a pariah. Those in support of Holly blaming her for the breakdown of the marriage and those indifferent, now saw her nothing more than a harlot and whore.

Not to mention the fact that simply having a marriage arranged did not make the heart stop wanting other thing. if she wanted evidence of that fact she only had to glance across to room to Dawn who despite betrothal arrangements had certainly not fallen madly and deeply in love with her brother.

“Do you think he’ll try and visit me tonight?” Dawn asked her voice full of fear despite the alcohol. 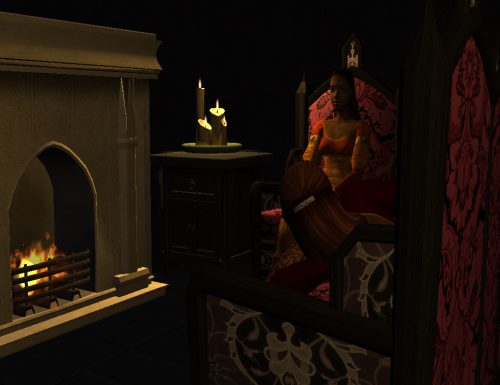 “I doubt it” Ailana decided, “Last time I saw him ,he was getting drunk with Abel”

“Honestly I shouldn’t worry I’ve seen Gabriel drink this way before, he’s not in the mood for women”

“I hope so” Dawn whispered. There was a long pause before the young girl spoke again. “Ailana….”

“I don’t know what to do” she whispered sounding terrified. “if he visit’s … I don’t know how? You know?”

“Oh….Your mother she didn’t….”  Ailana’s voice trailed off and she cursed herself. Of course Dawn’s mother hadn’t Lady Shaw had been dead for quite some time, well before ‘that’ talk was due.

Ailana cursed herself she’d spent some years up at the boarding school herself, other than a lot of nun’s talking about sin’s of the flesh poor Dawn wasn’t likely to have gleaned any information of any use. “Oh well its not too hard” she reasoned “Gabriel will know what to do…just lie still, it will be alright”

“What if he doesn’t” Dawn reasoned, “He didn’t have much luck with Jaedyn. Perhaps he’s doing it wrong?”

“I don’t think he was doing it wrong. I think men are born knowing how ‘that’ works”

“But what if he doesn’t” Dawn continued with all seriousness. “I’m mean there has to be a reason?”

“I don’t know what to say” Ailana admitted, “but I wouldn’t let Gabriel hear you suggest he was doing it wrong”

“Good” Ailana nodded, all amusement disappearing as she stood, she wasn’t quite sure where she was going. To bed perhaps… or perhaps for a walk.

“It it true you need to be naked?”

“Naked, Do you need to be naked all the way?”

“I don’t suppose” Ailiana replied grimly, “But Gabriel will want it I’m sure. Dawn im not sure how much advice I can offer… perhaps only this. Whatever Gabriel ask’s of you, do it.. without argument, he doesn’t like his woman argumentative”

Dawn nodded but before Ailana made it to door, she heard her voice calling again.  Sighing she turned to face the young girl she didn’t feel like answering yet more questions on a subject she knew little about.  “Ailana?”

“Can I offer you some advice?”

“Sure” she sighed not really wanting to hear it.

“Danson, could barely take his eye’s off you tonight” the young girl reasoned, “I think if you like him, you should tell him so”

“You don’t have to be” Dawn smiled.

One response to “The Girls Talk”