Maegan and Anya sat nervously in the lounge with the other women, the atmosphere tense as most of the women in the room had stakes in the duel outside and with her aunt and Ailana clearly on Peter’s side the girls felt out numbered and out matched hoping only that the time would pass quickly and someone would come and tell them who won. 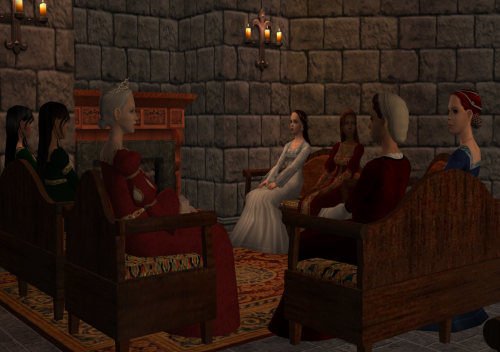 “Well I personally think it would be better all around if Peter wins” Jaedyn declared, she was in a particularly smug mood having finally announced the possibility of her second pregnancy.

“And why is that?” Maegan countered “So he can continue to hurt young woman?”

“Of course not, I’m hoping he’s learnt his lesson in that department” Jaedyn reasoned. “But you can’t deny it will ruin more lives if he’s hurt, think about it .. he has children .. they need a father”

“I dare say they’d be better off without him” Anya retorted.

Jaedyn huffed disgustedly “I mean what is Christopher playing at anyway? Serves him right, why on earth was he waiting anyway? Is he not man enough to take his wife? Someone else was bound to come along and do it for him eventually”

Maegan didn’t respond, she simply burst into tears but luckily she didn’t seem to need to Anya’s comeback already slipping from her lips. “I would have thought you of all people would have know about my brothers manhood” Anya retorted “But changing the subject, how is Finian?”

Jaedyn didn’t miss the dig, he face visibly paling, even Maegan looked up shocked giving her a desperate look pleading with her to stop.

“Oh Megs … Whats the point” Anya challenged. “The Hamdun’s are going to hate us after this regardless”

Anya ignored her “It’s true though isn’t it Lady Hamdun, Regardless of the outcome the Hamdun’s are going to pretty much declare war on my family, so we might as well let it be known that the heir to the Hamdun estate isn’t a Hamdun after all but a Vaux.. so tell me Lady Hamdun who did you blackmail to get you pregnant this time”

“I don’t know what your talking about” Jaedyn mumbled, looking quite ill as the lady’s in the room had all turned to stare at her. “You can’t believe a word she says… lying filthy peasant. How dare you try and drag my reputation down with your lies”

Anya didn’t reply realising the more Jaedyn protested the more guilty she looked, suddenly it all got too much for Jaedyn leaping to her feet she ran for the door in tears. She was just about to burst though it when it opened and a tired and dirty Christopher entered the room. “Watch it” he cursed diving out of her way, as she ran out into the corridor.

“Chris!” Maegan exclaimed, as the room fell silent all in shock from both the news and Christopher’s entrance.

“Aren’t you going to come and give me a hug?” he grinned.

Maegan nodded unable to contain the tears, she hurried to her feet and into his arms. “Lets get out of here” she begged. 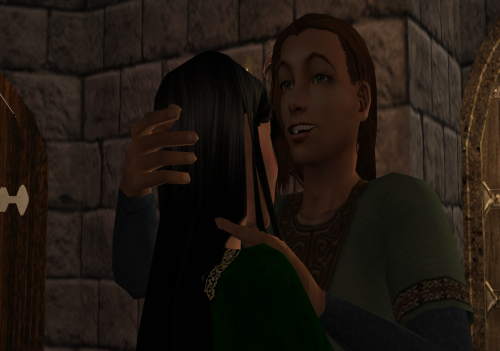 Christopher nodded but before he guided her out of the room her turned to Ailana “I’m sorry for your loss” he smiled sympathetically. “Your brother fought well”

One response to “Anya’s Comeback”