Daniel skulked down to the kitchen’s for breakfast avoiding the great hall at all costs, it was bad enough that every guardsman he seemed to pass was staring at him. Laughing no doubt at his failure as a man.

The last thing his needed was to run into the family who would be ever so concerned while secretly laughing at him behind their hands, whispering about what had happened or not happened in the so called privacy of his bed chambers.

After he’d hit her Sophie had hit, spat and clawed at him raging like an angry wildcat trying to be free of him. Proof of which lay quite clearly in the purple moon shaped bruise, he now sported on his hand and his split lip.

What he’d actually gotten had been so far from that, he now wondered if he ever wanted her bought to his chambers again.

The climax of his evening had not been making love to his new wife the way it should have been, but instead him taking his pillow into the wardrobe and sleeping on the cold stone floor between the bath tub and the close stool.

He would have headed to Sophie’s chambers and slept there if for the simple fact that he would have had to pass the guards on the doors and admitting failure was more than his pride could stand. At least once he was out of the way Sophie seemed to calm and did seem to go to bed, so at least he was grateful for that.

Reaching the kitchen’s he found the staff huddled around gossiping in hushed voices, instantly stopping the moment he came into view, it didn’t take much to know what they were talking about. Still he was grateful for the lack of questions as they hurried into action preparing him something to eat.

He was just heading back to his chambers armed with a peace offering of food for Sophie when he ran into Thomas in the hallway.

“Wonderful” Daniel scowled unimpressed by his brothers attempts at humour.

“What’s wrong with you?” Thomas retorted.

“I suppose your all laughing this morning, aren’t you?”

“Laughing? Laughing about what?” Thomas replied genuinely not seemed to understand “Why do you have a split lip?”

Daniel felt suddenly relived as he realised the wall’s of the castle where far too thick for Sophie’s protests to be heard, the only ones who’d heard anything were the guards at the doors.

His sudden relief was short lived, as he realised that by now word was spreading fast amongst the servants and it was only a matter of time before, like the gossiping kitchen staff Thomas knew as well. “You’ll find out soon enough” Daniel growled pushing past Thomas and heading up the stairs. 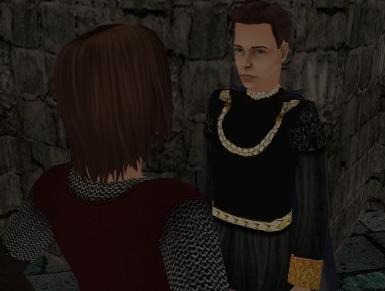 Thomas chased him, catching up at the top of the stair’s “Daniel what’s going on?”

“You married me to a lunatic that’s what’s wrong!” Daniel snapped.

“Sophie, she did this?” Thomas asked lifting his hand to his brother’s face.

“And this!” Daniel growled thrusting his hand into Thomas’s faces showing him the bite mark “and more besides, ones for which I’m grateful my clothes cover”

“Oh dear” Thomas replied unable to hide the smile which slowly crept across his face.

“I’m sorry” Thomas apologised “What did you do to her?”

“Did you try and take it slowly?”

“Take it slowly” Daniel growled “I didn’t take anything anywhere. I couldn’t even get her to the bed to sleep until I left the room and slept in the wardrobe.

“The wardrobe!” Thomas exclaimed, the smirk returning to his lips “Oh dear”

“I’m sorry” Thomas chuckled, unable to hide his amusement any longer “I guess children aren’t on the cards then”

This entry was posted in Daniel Silverhand, Thomas Silverhand and tagged Jul 1040. Bookmark the permalink.