Kaitlyn poked at the fire her nerves getting the best of her. Everything was confusing she couldn’t believe the happening’s of the past few days the new’s of Alistairs return was earth shattering just as she’d gotten used to being married to Lar’s. 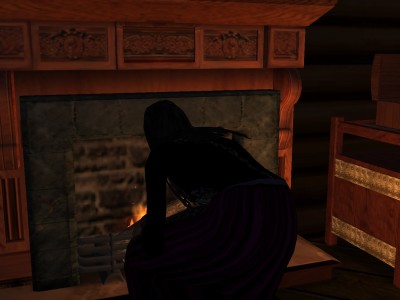 She felt as though she were about to burst, her head was spinning and her chest was tight so make thoughts racing around her head. There was a mild relief, perhaps the event which triggered Henry to send her here to Lar’s, had not been some insanity on her part. That night when she’d swore that Alistair had returned to her perhaps was not the creation of her grief stricken mind.

That would certainly be one of her first questions for Alistair, had he returned to her then and if so why did he not stay? With these thoughts came guilt, guilt that she’d not pushed the matter. Henry had said he’d opened Alistair’s crypt and that Alistair’s body was still contained within had he lied?

Everything was so muddled, when Thomas had returned from the mountains she’d spent day’s in grief with Alistair before his burial. If the corpse she had personally tended was not her husband then how, how had she mistaken it so? Did she really know her husband so little?

The noise of the back door opening to her right broke her from her thoughts, standing she recognised Wolf entering the Cabin “He’s here” he stated grimly.

Wolf nodded before leaving Kaitlyn alone again, Kaitlyn figetted nervously straightening her hair and re-arranging her gown, gazing into the flickering flames she felt at that moment that throwing herself into the dancing flames would be easier than dealing with the situation at hand.

A few moments later Lar’s entered the room, she noted immediately he was armed and she also noted the blade he wore was not his usual battered sword but a cleanly polished edge of silver.

“Do you really think a weapon is needed” she asked directly hypnosised by the way the light danced on the luminesent blade.

Lar’s shrugged “Rather have one and not need one” he replied grimly.

“Don’t you think it gives the wrong impression?”

Lar’s didn’t reply instead heading to the window he watched as the royal coach arrived she watched as he scanned the visitor’s and knew instantly that he was weighing them up.  Her hands felt suddenly sweaty, pacing she forced herself to calm down. Watching in anticipation as Lar’s opened the door to greet his visitors.

Thomas entered first, flashing her a reassuring smile before Alistair came into view. As he rounded the corner her legs suddenly buckled, but she soon found Lar’s strong arms tighly around her waist “Youre alrite lass” he smiled as he held her steady, though she couldn’t remember him even moving to her side.

Kaitlyn felt faint, she’d almost managed to convince herself that Alistair was some kind of imposter and that the minute she saw him she’d know. The truth of things was no-where near as simple, instead the minute she’d seen him she’d known it was indeed him.

She watched not taking her eye’s off him for a moment as he and Thomas took a seat next to the fire. Her fascination with him only matched by his, with her.

She barely registered Lar’s guiding her into the chair, it was only when she finally managed to tear her gaze away from Alistair’s impish grin, that she noticed a flame haired woman sat beside her.  Was this the woman Lar’s had warned her about? The one he thought had some sort of control over Alistair? 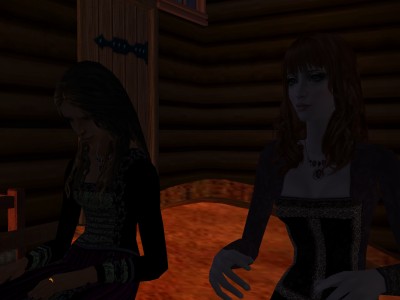 Everyone but Lar’s sat, he instead stood protectively near her, or was it that he stood threatingly near the flame haired woman she couldn’t decided. 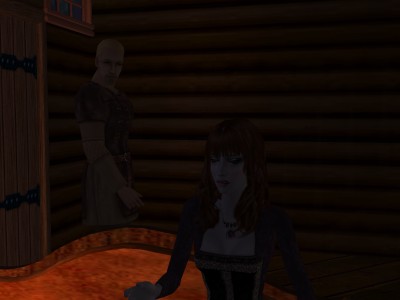 Thomas smiled, “I realise this is difficult for everyone involved, it’s a difficult situation”

Kaitlyn nodded in agreement looking nervously towards Lar’s who seemed even more on edge than she did. “What happened?” she asked turning back to Alistair “Thomas tell’s me you were held prisoner in the mountain’s?”

“The demon hordes… they … they where controlled by Risa, she took me and replaced me with an imposter”

“You expect me to believe Risa is alive, she was hung, your father he saw it was done?”

Alistair shrugged “Im not sure what to tell you Kait, I wasn’t privy to her resurrection.. we” he said nodding at Siren  “We believe she’s currently in control of the Beaumont estate” 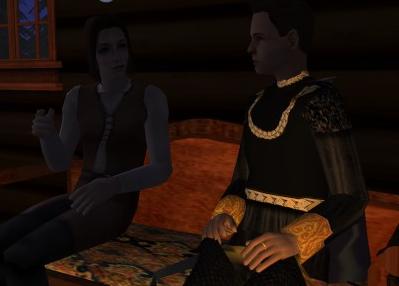 “Which explains alot of the going’s on there” Thomas agreed, “Valdermar has gained alot of power very quickly” he explained “a pact with a demon seems likely”

“It’s been over 5 years since those creatures where over thrown” Kaitlyn reasoned “why did it take you so long to return to me?”

“I wasn’t freed till a few months ago, true the creatures where broken however small pockets still exist, this woman and her friends rescued me recently. I had some healing to do but as soon as i was able i came back to you… i’ve missed you Kait” Those words where too much for Kaitlyn she burst into tears her head in her hands. “Kait” Alistair exclaimed moving towards her.

“OY! Sit DOWN lad” Lar’s growled before Alistair reached her side, moving to her himself and resting his hand re-assuring on her shoulder. “It’s alrite Kait”.

Kaitlyn nodded trying to wipe away the tears she struggled to remind herself that she was a lady and crying in front of company not to mention the king was not fitting behaviour. “What now?” she asked “What are your plan’s”.

Alistair shrugged “Well it seems the Kingdom is now in the care of Thomas here, so I’m just looking to build a life for us”

“Yes” Alistair grinned “if you’ll have me??”

Kaitlyn turned, looking over her shoulder towards Lar’s who had already skulked off into the corner “Alistair, I’m … I’m honoured… but I’m married, you realise that?”

“Yes” Alistair replied sadly “but I love you…surely I need to at least fight for you”.

“I’ll fight yer for her Lad” Lar’s muttered under his breath just loud enough that everyone heard it.

“I realise this is difficult for everyone” Thomas interrupted “I’ll be honest I’m not quite sure how to deal with it, Kaitlyn what do you want?? Do you wish to stay here with Lar’s or come with Alistair” 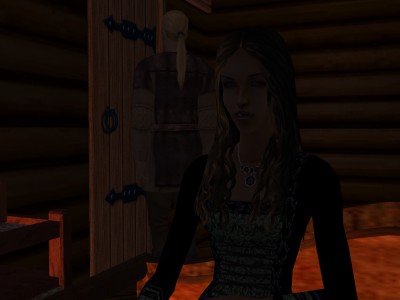 “I don’t know” Kaitlyn replied looking back towards Lar’s again. He’d turned away unable to face the answer but she didn’t need to look him in the eye to see how difficult this was for him.

She knew then that the love he had for her was as true as any Alistair had ever had “I don’t want to hurt anyone.. you are both very important to me” She whispered.

“Then come with me” Alistair smiled, walking over he took her gently by the hand despite. Lar’s growled slightly but remained still. “Come with me Kait” he grinned pulling her to her feet “I’ve missed so much time with you, we have beautiful children, I want to watch them grow”

“Alistair… “ Kaitlyn protested her heart feeling like it may burst, torn in so many directions. “I missed you… but I have little girls who need me”

“Maegan is almost a woman” Alistair replied not understanding “you can be a mother to her at home with me just as easily.. Thomas has given me the house in which we first lived, don’t you want to come back there with me”.

“No” Kaitlyn murmured slipping her hand out of his folding her arms scared that if he touch her alone she would lose all conviction. Walking over to Lars he decision made she looped her arm into his. “I have girls with Lars … babies who need me; I can’t run off and leave them”

“You have children?” Alistair asked giving Siren a sideway’s glare, which Kaitlyn took to mean she had known but hadn’t told Alistair.

“Yes I do” she replied nervously looking down at the floor ashamedly.

“But how… how could you?” Alistair staggered “your my wife… how … with another man, not even a man”

“Forgive him” Siren interrupted, almost as though she was interrupting to save Alistair from saying anymore. “It’s my fault, I didn’t tell him… I guess we.. “ she said looking towards Thomas” Assumed that because you where married that he’d realise children where part of it”.

“Im sorry” Kaitlyn mumbled “I thought you where dead”.

“You let him touch you?” Alistair mumbled more of a statement of disgust than a question “you let him lie with you… but he’s a beast, an animal”

“it’s alright” Alistair replied recovering himself. Kaitlyn’s heart breaking, as she watched to pain in his face, for all of Lar’s warnings, she knew at that moment that Alistair had come for her because he loved her, because he wanted her not because some flame haired woman had ordered it to be so.

“He’s a good man” Kaitlyn tried to explain, trying to make him understand “He’s taken good care of me”

Alistair waved her silent as though he could not bare to hear anymore. “Come with me any way” he replied “bring them we can raise them together”.

“This isn’t upto you” Alistair growled back “ Kait please come with me.. i love you”.

Silence came over the cabin Kaitlyn felt torn in two, Lar’s had given her so much she had two beautiful children but Alistair … he had been the love of her life, losing him had almost ruined her she couldn’t face losing him again.

Suddenly the silence was broken a wolf howling out in the woods followed by a second and then a third. “Whats that?” Kaitlyn asked nervously.

This entry was posted in Alistair Silverhand, Kaitlyn Hamdun, Lar's Karogar, Siren, Thomas Silverhand and tagged May 1040. Bookmark the permalink.