Thomas rode hard towards the castle; he’d got it a solution to the problems. A plan that would allow him to remain married, and would still secure the throne for future generations. It was so simple so obvious he was amazed no-one had thought of it earlier.

Climbing from his horse he ran into the castle, passed some guards who directed him to his fathers current location and towards his fathers chambers. Thomas knocked loudly on the door.

Inside King Henry heard the knocking, wiping his face over the bowl he handed the rag and bowl of blood stained water to his wife.

“One minute” he called weakly.

“Let me at least see what they want” he replied, breaking out into yet another fit of coughing that bought up huge droplet’s of blood, into his handkerchief. Wiping his mouth he hobbled towards the couch, settling down he waved his hand indicating his wife should leave.

Annabelle nodded, slipping the bowl under the bed where it couldn’t be seen, she opened the chamber door “Thomas” she beamed seeing her son “so good to see you”.

“Is father around” Thomas asked eagerly.

Annabelle nodded “Yes, go in” she smiled “But don’t keep him long he’s tired” she added.

Thomas nodded kissing his mother lightly on the cheek he headed into the room taking a seat next to his father. “How are you father?” Thomas asked noticing how pale his father looked.

“Not getting any younger” Henry replied with a chuckle “So does your sudden appearance mean you have made a decision?”

“Yes, I don’t think it’s what you had in mind but I have an idea”

Henry nodded “Well what is it”

“Do we both agree that under normal circumstances Duncan would have taken the throne after Alistair?”

“Yes I suppose” Henry replied “but he’s too young” he added.

“Yes I agree” Thomas replied “but the simple fact is that in all fairness to the boy he is the rightful heir?”

“Agreed” Thomas replied “But if you where to give the throne to either me or Daniel what would be the biggest threat to the throne in… say 10 years??”

“But is that really the right thing to do??” Thomas asked “in all fairness she just wants Duncan to have what he would have gained should Alistair have lived”

“Im not should what you’re getting at”

“He’s too young” Henry protested “We’ve been though this”

“He might not be” Thomas replied “you might live another 10 years, besides don’t give it to him straight away…. Pass me the throne and ill pass it back to Duncan when he’s ready.”

“No not exactly… ill be keeping it for him, acting as regent till Duncan is old enough to reign… between now and then ill do my best to prepare him, teach him what he needs to know”

“You’d be passing by the opportunity to be king?” Henry asked.

“Father I’ve never cared for being king, I love what I do now heading the military besides Holly is always going to be a obstacle she takes far too much of my time to rule”

Henry nodded, his head swam and he felt quite faint “What about Daniel?” 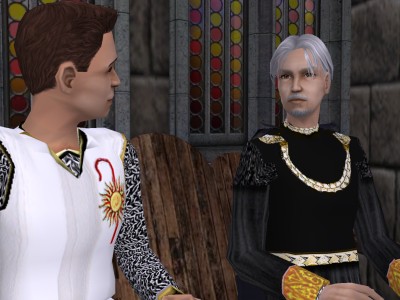 “Daniel’s not fit to rule, you haven’t seen him over the passed few years he’s got arrogant and bull headed and he’s far to eager to send us to war for my likely…Duncan’s young but he’s surpassing all Vince’s expectations as a knight, he’s a good boy so much like his father … he’ll make a good King”

“I don’t know” Henry replied “Regents aren’t always very steady, besides what if in 10 years you decide you don’t want to pass the throne to Duncan”

“Father!” Thomas pleaded “Even if I don’t is the kingdom really going to be in any worse state?? We are going to have Kaitlyn breathing down our necks anyway this way we give her what she wants and the kingdom gets the stability it needs”

“Hmmm” Henry sighed “Regent’s don’t have a particularly good track records, when a regent rules people generally use it as an excuse to rival the crown”

“Perhaps” Thomas admitted “But rallying up to take the throne takes men, time and money. Who has the power right now?? It would take years for any of the nobles to gather that sort of backing and Duncan will be ruling by then”

Henry nodded “Let me think about it” he replied “Your idea has merit, I’ll discuss with the council and Father Matthew and I’ll let you know”

“Thank you father” Thomas grinned, “Duncan will make a fine King I swear I’ll make sure of it”

Thomas smiled “Thank you” leaning forward and gave his father a kiss on the cheek “I’ll let you get some rest now” he said standing he left the room.

Henry sighed He didn’t feel at all well, closing his eye’s he lent back in the chair considering Thomas’s proposal, it definitely  had merit and he knew the council would see it too.

A few minutes passed as he mulled over the idea, and the more he thought about it the better it sounded, it was simple, clean and he knew Thomas would see Duncan was properly prepared.

Opening his eye’s he hauled himself out of the chair and made his way over towards the bed, just a quick sleep he thought before he called for the council meeting to discuss the new plan, just a few minutes he thought as he lay his head on the pillow…. Just a few minutes………