Meeting the head of the house

Raeann woke, it had been a restless night, she was fuming how dare her father dump her in shame here with her mother. Suddenly the whole world seemed a very insecure place, and being dumped here was the one option that had never entered her head. Well at least she was close to home; she’d visit her father this morning and demand to know what was going on.

The morning passed she watched as her mother prepared breakfast for Chase and Bailey the children Lynette had given birth too following a bad relationship with a man she courted after she and Orrick had split up.

Raeann sat there watching the children in disgust as they laughed and ran around, she’d never made the effort to get to know her younger siblings and had never considered them family, once breakfast was over she’d headed up to her fathers estate, returning a few hours later in tears.

Her father had not wished to see her, however after much insistence he’d finally agreed, it had been a short meeting where she’d learned that with her mother was where he planned for her to stay permanently, there would be no further marriage offers and no dowery’s.

In fact he seemed very doubtful that the church would even let her marry if she was to find someone for herself, because now like she mother she was the cause of a divorce.

She’d sobbed and screamed but it had al been in vain, Orrick had finally reached the end of the line with her, negotiations where over. Life from now on would be what Raeann made of it.

Feeling very drained Raeann entered the house, she was ravenous heading to the kitchen she hoped to find her mother to make her something to eat.

Much to her surprise instead she found an elderly gentleman, who seemed to be cleaning. “Good Afternoon” he smiled”You must be Raeann”

Raeann looked at the elderly man with disgust “who are you? “She demanded “Are you the housekeeper?? Wheres mother?”

“Im Mather” he replied “Im a friend of your mothers”

Raeann nodded “what are you doing here?”

“I was cleaning away the dishes” he replied “would you like to help?”

“No!” she scoffed “I’m hungry is there anything to eat??”

Mather nodded “there are leftovers in the parlour I believe, help yourself”

Raeann stormed towards the parlour clearly not impressed, helping herself to a few pieces she began to eat “Where is mother?” she asked.

“Food doesn’t magic it’s self on the table” Mather replied.

“Im not working” she replied indignantly.

Mather wandered towards her and smiled snatching the apple out of her hand “If you don’t work you don’t eat” he replied simply taking a bite.

“You can’t talk to me like that” Raeann snarled.

“Im the head of this household, a household to which you belong” Mather snarled “If you don’t like it the door’s that way” he said pointing.

“Your mother works, your brothers we all do our share to bring money into this house if you don’t work you don’t stay… Im sure there’s a whore house somewhere with an opening, Im sure you’d be very popular with the lower class’s”

“How dare you!!” she snarled, just then the door opened and her mother entered the house, heading over she smiled “how are you darling?” she asked kissing Raeann lightly on the cheek. 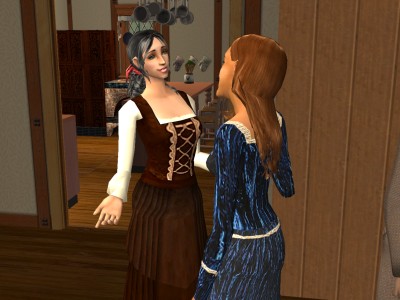 “Who is this man??” Raeann demanded “He’s been insulting me!! Tell him to leave”

“I can’t tell him to leave” Lynette laughed “he lives here”
“Why??”

“Im not explaining it to you Raeann, Mather is my partner, he takes care of me”.

“Yes!” Lynette snapped “amongst other things, and I love him so get use to it”

“You should be ashamed of yourself” Raeann scoffed.

“Excuse me, young lady and don’t believe in your current situation you have any room to talk, wait five or ten years of living alone and you might consider options that may have seemed unthinkable in the past”

“Why didn’t I know about him sooner?? How long have you been together” Raeann demanded.

“What about Chris and Daria what do they think?? Do they know??”

“Yes of course they know, they’ve been to dinner several times over the last few years, unlike you who only see’s fit to contact me when you have something the whine about… now can we please stop discussing my personal life and move on to what’s important… how we are going to sort out this mess you’ve gotten yourself into and how your going to fit into this household”

“Yes, that and other things” Lynette replied simply.

This entry was posted in Lynette Beaumont, Raeanne Vaux. Bookmark the permalink.

2 responses to “Meeting the head of the house”