Fanglor was 70 years Lar’s senior, he’d once led the pack but a few years previous the pair had a similar confrontation as this over Wolf’s mother, in that fight Fanglor had lost the pack and a testicle to Lar’s. 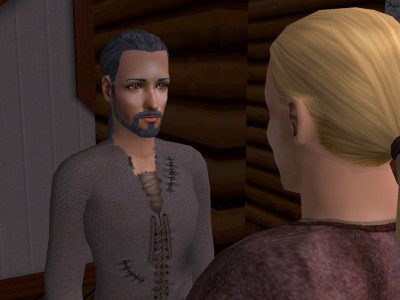 Lar’s lent over the smaller man asserting his dominance much as wolves would in the wild, a firm hand on the older man’s shoulder he forced him to his knee’s. Fang submitted to the stronger man, knowing that pushing the matter could possibly lead to his banishment or death

Werewolf politics’ where much simpler than that of Vampires or men, taking their lead from natural wolves who many of their number originated. Packs where run by the dominant male and female, known as the Alpha’s, each controlling wolves of their gender.

With wolfs the Alpha’s were usually a mating pair from whom the rest of the pack originated, things where not so simple with werewolves, a pair could not mate, both alpha’s were required to find mates in either the human or wolf world, so the alpha’s where decided simply and cleanly … strongest win’s.

“The Ale’s that way” Lar’s growled, pushing Fanglor towards the kitchen, watching for a moment he made sure fang took his suggestion, satisfied Lar’s stalked towards the laundry room.

The scent was almost overwhelming as Lar’s reached the door, he’d forgotten how intoxicating a woman’s scent could be at the height of her fertility. Sometimes he regretted having Fanglor teach him the gift that allowed him to use his wolf’s keen senses in human form, and even more regretted teaching it to his son, wolf mating instincts could be strong.

Human’s had long since forgotten how to tell when a woman was in season, relying almost solely on pot luck for their procreation, it was easier for Fanglor, his mate a grey wolf only went into season once a year, in humans it occurred once a month.

Raeann and Kaitlyn where pretty in sync Kaitlyn reached her height a day before Raeann, last month had been simple Lar’s had taken Wolf hunting for a few days to get the boy who had less self control out of the house…. ” Damn feast” Lars growled.

Kaitlyn stood, folding and re-folding sheets, pretending not to see Lar’s, he stood watching her for a moment, fascinated by her movements, and more by her scent, it was very strong now, mating anytime in the next few hours would almost certainly result in pregnancy, after that her scent would slowly die and her fertility decreasing with it.

Fanglor a born wolf would consider mating any time after today a waste of vital energy’ Lar’s managed to chuckle “There were some advantages to being human born” he thought not that fang would agree, Fanglor like many of their numbers though those born in human form inferior to those born of wolf. 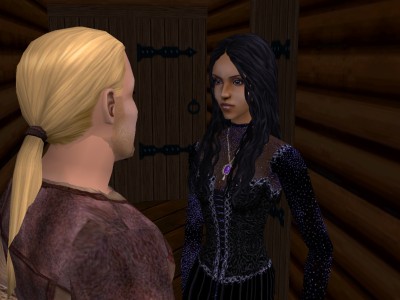 She turned a harsh look on her face “what?” she snapped.

“I’m not avoiding you” she retorted.

Lar’s smiled “Aye ya are, I know yer mad at me and rightly so im guessin”

“Then tell me the truth” she demanded.

“Cause ye wouldn’t understand, and ye wouldn’t believe me, just trust me when I tell ya I would never hurt ye” 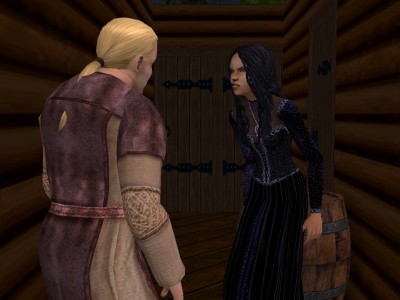 “Then I can’t talk to you” she snapped trying to push passed him.

As she moved passed him, her body pressing up against his that scent, that wonderful scent rushing though his senses, the urge suddenly to strong.

He grabbed her spinning her around the face him, his stronger hands on his waist her caught hold of her lifting her on to one of the storage barrel’s where he pushed his lips against her taking the young woman totally by surprise.

Stunned Kaitlyn pulled her self away, “what are you doing?” she managed to gasp before his lips reached her’s once again, it wasn’t a totally unpleasant experience and despite the sudden urge to return the act, Kaitlyn managed to push him away. “What are you doing” she demanded.

Lar’s stood in silence not quiet able to formulate a response, suddenly ashamed at his own lack of self-control. “I’m sorry” he mumbled.

Kaitlyn jumped down from the barrel “is this some crazy plan between you and Wolf” she demanded straightening herself up and pushing herself passed him and into the hall “just because I told him he should Kiss Raeann, you think the same will work for me???”

“Well it won’t work” she interrupted “leave me alone until you are ready to tell me the truth” and with that she stormed down the corridor back towards the party.

This entry was posted in Fanglor, Lar's Karogar. Bookmark the permalink.