Taye busied herself in the kitchen, today was an important day. Her mother had taken a turn for the worst over the last few weeks and it had made her realise what she needed to do. 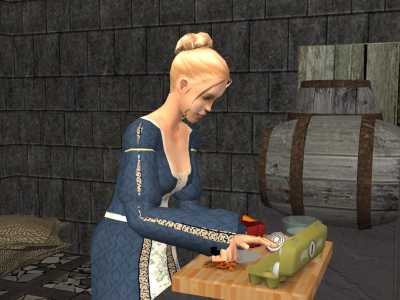 Clara was sick each year she suffered though the cold winter months and each year Taye prayed her elderly mother would make it though, this year was worse than ever and everyone in the household knew it.

Clara had spoken with her after Forrests last visit about the importance of grasping things while they where there, and Taye finally understood what her mother was talking about.

Forrest was important to the whole family not just Taye, and for more reasons than just the way he made the young girl feel when he was around her. If Taye waited for Forrests promotion she’d have a nice house for a while, however it wouldn’t be long before she needed to make a difficult decision.

Even if Clara made it though this winter it was unlikely she’d make it though the next, leaving Tayes little brother Lysander alone. Clara had plenty of children she knew would take Lysander in not one of the Gawen family would leave a sibling stranded, but if Clara was to die the Baeumonts would undoubtedly lay claim to Gabes house, with Lysander too young to run it alone.

So Taye had made the decision that one way or the other she was going to stay in the house until Lysander was old enough to run it alone as Gabe would have wanted.

She hoped however that Forrest would understand her decision, in fact she hoped he’d see it as the good news she did. Staying in the house meant they didn’t need to wait for his promotion to get married, he’d once offered to help her family so surely he’d understand, they could get married straight away with him moving in to the lake house.

Spend the next few years saving so once lysander was old enough they’d have enough saved to rent something better than the average officer accommodation. She knew it would be hard work for him travelling back and too from the barracks, but he’d once said she was worth it, she only hoped he still felt the same way.

He usually arrived around midday. So after finishing preparing dinner, she checked on her mother who was sleeping soundly, and ran out into the garden to wait. Settling down on the old tree stump bench she could barely contain her nerves, today was indeed going to be a big day.

This entry was posted in Clara Gawen, Taye Gawen. Bookmark the permalink.

2 responses to “Waiting for Forrest”