It was the end of a long day and Taye was just closing up the shop. Locking up the door she noticed Forrest out of the corner of her eye sitting on a nearby fence, jumping down he headed over smiling.

Taye raised an eyebrow “ anyone would think you where following me”.

“Anyone would be right” he smiled.

“So what do I owe the pleasure” Taye smiled.

“I’m a pleasure am I? Forrest smirked “At least Im making progress”

“A reward for what? Did you get a house?” she asked.

“Not yet, but its still something good, if I tell you, you must promise to give me something”

“What do you want?” she asked suspiciously. “Ill let you decide what I deserve,” he said with a grin.

“Ok” she answered nervously. “I got a promotion, just two more then I’ll have our house” he grinned.

Taye smiled, and nodded “That’s great” she replied, genuinely. “But I think your getting ahead of yourself calling it ‘our’ house. I haven’t agreed to marry you yet”

“You will” he replied with a confident smirk.

“So what my reward?” he asked cheekily.

“Hmmm” Taye thought for a moment “I’ll let you walk me home” she replied.

Forrest nodded “Do I get a kiss at the doorstep?” he asked.

Forrest laughed “What about dinner? Surely you can save a poor solider from the torture of the mess hall for just one night”.

“My mother will be home” she replied “ and my brother, but if you don’t mind dining with them I suppose I can manage, but it won’t be fancy”. 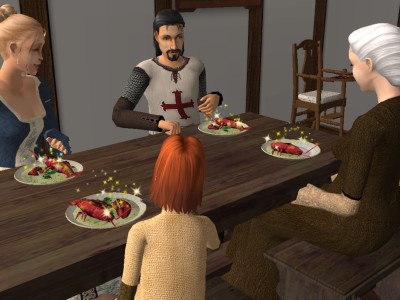 Dinner passed smoothly and by the end of the meal Forrest had already managed to convince Clara to help him gang up on Taye, not that it had taken much of course.

Clara was getting old and she knew she wouldn’t be around much longer and there was nothing she wanted more than to know all of her children where happy and settled in secure homes, Other than Lysander, Taye was the last she needed to settle.

The meal was over and Clara suggested that Taye took Forrest outside to see the river, Taye had resisted but Clara as usual, had decided and wasn’t taking no for an answer, practically pushing the pair out of the front door.

“Your mother seems to like me” Forrest said with a chuckle.

Taye shook her head, “My mother would like a turnip if she thought it would give her more grandchildren”.

Forrest laughed heading down towards the water, “Your mother seemed to do ok, for herself” he said nodding over to the house “The house is beautiful”.

“Aye” Taye nodded, “I worry about how my mother, will upkeep it if I leave though, she was really struggling when I lived with my husband, she almost lost everything”.

Forrest nodded sensing the worry in Tayes voice “ I won’t let anything happen to her, we’ll take care of them, I promise”.

Taye smiled, uncertainly “You haven’t even gotten us a house” she whispered “ and your already planning on keeping two households”.

“So you agree there’s an us?” he said with a grin, reaching out he clasped her hand and pulled her too him.

Taye resisted, her heart beating so fast she thought it was about to leap out of her chest, Forrest cupped the back of her head, running his fingers gently down her neck and onto her shoulder “ I might need to get ten promotions rather than just two” he smiled “ but I think your worth it”.

2 responses to “Dinner at Clara’s”