The picnic holds an unexpected suprise.

Holly came down the stairs into the barrack’s kitchen to make herself some breakfast, Orion was busy trying to make sandwiches, he cursed as he yet again cut his finger on the knife.

Holly laughed coming up behind him, she lend forward giving him a peck on the cheek, “let me do that, before you kill yourself, I hope you better with a sword than you are with a kitchen knife ” she said taking the knife out of his hand.

“I hope you don’t kiss all the soldiers” he smiled.

Holly chuckled “Only the handsome ones, and those Im related too”

Orion moved letting Holly get near the chopping board, he started to pack up the bag for his and Narrisa’s picnic, he looked towards holly and shook his head “ I still can’t get over you, all dressed up and noble, I still remember when I used to pull your pigtails”.

Holly scowled “ yes I remember that too, but be warned, I pull back now” she said with a laugh “ besides I’ll just have you executed if you try”.

Orion smiled, pulling a small wooden box out of his bag, “ I made these for Hannah, do you think she’ll like them?” he asked passing the box to Holly.

Opening the box Holly looked inside, there where about 20 perfectly made farm animals made out of carved scrimshaw. “Oh there beautiful” she exclaimed “ Im sure she’ll love them, your father would be proud you didn’t let your talent go to waste”.

Orion nodded “thank you” there was a pause before he spoke again “ Holly how has Narrisa been? Do you know if she’s been seeing anyone while I’ve been gone”.

Holly shrugged “A man you mean?” Orion nodded, “ Im not sure” she answered “ I’ve been at university almost the entire time you where gone, I don’t think so though, im sure my mother would have mentioned it”.

Orion nodded “ So how are you finding being a princess?” he asked.

Holly laughed “ I can’t say I feel much like a princess running around after a barrack’s full of soldiers, who can’t even make their own sandwiches” she said handing the neatly wrapped packed of food to Orion.

Orion packed the sandwiches away with the rest of the food, and gave Holly a quick hug “ Thanks” he said.

Holly caught hold of his hand squeezing it gently “ it’s good to have you back” she smiled “ and don’t worry she’ll forgive you, Im glad you stopped acting like an idiot you were always a good friend when we were kids”.

Four hours later, Orion had rode across Grimstead to the Shaw estate where Narrisa lived, knocking on her door he, adjusted his new Grimstead Uniform and waited nervously.

Eventually the door opened and Narrisa stood before him, she had done her hair up and had obviously made an effort for him wearing a pretty blue dress. “You look beautiful” he said smiling.

Narrisa fidgeted nervously “thank you, come in Im running a bit late” she said, “Hannah’s being fussy this morning”.

Orion entered the house and sure enough from upstairs he could hear his daughter screaming the house down. “ Want me to see to her?” he asked.

Narrisa shook her head “ its ok I’ll get her, she’s just having a temper tantrum, it will stop as soon as we go out”. She headed up the stairs returning about fifteen minutes later with the little girl in her arms who hand stopped crying and was now smiling excitedly.

Orion led them outside to the wagon he’d borrowed for the trip and the couple headed off to their picnic. The day passed quickly, Narrisa could not believe how much Orion had changed he seemed like a different man, which made it very difficult for the young girl.

He sat playing quite happily with Hannah who took to him, as soon as he gave her the farm set he’d made, shooting Narrisa wide grins every so often. Finally late in the afternoon Hannah fell asleep on the picnic blanket exhausted from all the fun she’d had. 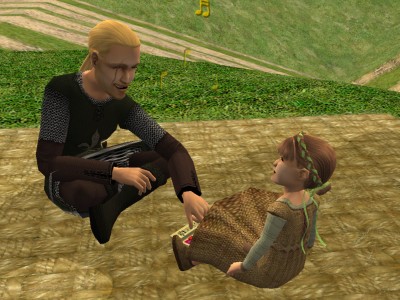 Narrisa lay in grass watching Orion who sat stroking the little girls hair, giving her a peck on the top of the head he shuffled over to where Narrisa lay. “ She’s amazing” he said “but I feel like I’ve been neglecting you”.

Narrisa smiled nervously; in truth she’s been kind of glad he’d been paying more attention to the little girl than her. “ it ok” she whispered, very aware of the hand Orion now rested on her waist.

He lent forward pecking her on the cheek, she froze. She didn’t know why but it just felt wrong. Logically she knew Orion was her husband but he seemed so different she couldn’t quite fit the old and new Orion’s together, it felt almost like it was a different man, and somehow that by allowing herself to like this man she’d been cheating on the man that was her husband.

Orion looked at her “Are you ok?” he asked.

She nodded “ Im sorry” she said “ its just all so confusing, Father Mathew tell’s me that I must accept you back into my life as my husband”

Just then the peace of their picnic was interrupted, as a young boy barrelled though their picnic area, half running half tumbling he collapsed at Orion’s feet.

3 responses to “The picnic holds an unexpected suprise.”