Over the next few day’s Thomas tried to come up with a solution regarding his son that did not necessarily involve his father, it was no longer that he was embarrassed of ashamed of what had happened with Jasmine, just that he wanted to deal with the problem without having to fall back on calling the king in to solve his issues.

He’d called back the Darkfire mansion several times over the last few days and negotiation’s had gotten him no-where, all he wanted was to know his son, he wasn’t demanding the couple hand him over, or that Tarik cease taking care or loving the boy just that he be allowed in his life.

However on his last visit Tarik had made it clear that negotiations where at an end and had even physically thrown Thomas out of the house telling him that he’s changed his mind about even letting Thomas see his son.

Life around the castle was manic, half the people preparing for the royal wedding, the other half sorting out the new army, and Thomas had a lot of responsibility dealing with both so he decided to give Tarik a few weeks to calm down while he dealt with the other issues, before re-starting the battle over his son.

King Henry had sent runners to the mainland to hire mercenaries, to fill out their army. The deal he’d proposed had been an attractive one, each man would be paid well for their service and after10 years of service they would be granted their own land, not an estate like nobles where granted but a small patch of earth they could call their own and raise a family if they wished and it was this offer that had boatload after boatload of men and their family’s arriving on the shores of Grimstead and Thomas was incharge of it all.

Raeann had been told of the plans to move into the fort once they where married and she had erupted violently; making it very clear she hated the idea.  However Thomas made it clear it was out of her control, she was just going to have to make the best of it.

Raeann had always been prone to temper tantrums even back at university and Thomas figured if he started catering to them now he’d be catering for the rest of his life.

Thomas was up at the fort, with Reanne showing her around, the place was busy with people milling around doing the renovations, new soldier’s where already beginning to move in and the place was buzzing with excitement.

Thomas showed Raeann around, and in each room she had a complaint most of them centred around the fact that she would have to share the facilities with the soldier’s. 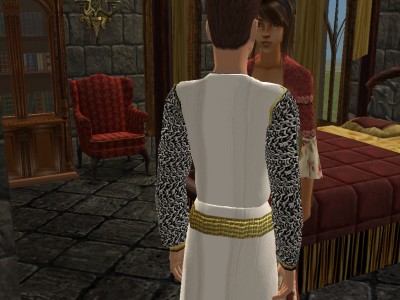 Reaching the bedroom Thomas guided her inside “ and this is where we’ll sleep” he announced.  Raeann peered around the room with a look of disgust “ only on bed she asked?”

“Well I can have a second bed moved in, if you’d prefer? I understand you you’d rather not share with me right away”.

Raeann glared back “No its fine, I just expected to be sharing my bedroom with the soldier’s too”.

Thomas chuckled “No we get this room all to ourselves” moving up behind her he wrapped his arms around he waist.

She span slapping him hard across the face “Get off me” she scolded.

Thomas let go rubbing his cheek “ Oww… you know, where to me married in two days, I really don’t think me putting my arm around you is any reason for you to slap me”.

Raeann glared “You’ll keep your hands off me, till I say otherwise” she said indignantly.

Thomas strolled casually across to the bed, “So” he asked, “ is it really as bad as you thought it would be?”

“Its worse” she replied “Am I too assume, we’ve at least got house staff”

Thomas nodded “We will have” he replied “Nancy, Sir Bendett’s wife, used to cook and clean up at the castle, she’s going to be living in a cottage down the road with her husband, she’s agreed to come and help of a daily basis, but id like to get someone live in as well I just haven’t found anyone yet”.

“What about Holly? ” Raeann suggested, “ she’s come back from university without a husband, so its not like she has anything better to do”.

“Im not sure that’s a good idea” Thomas replied.

“Why not? If Im going to be living up in this dump, id rather have at least one person I can hold a conversation with”. Raeann protested.

“Well Im just not sure, having a young girl like that, around all these soldier’s, is a good idea” he lied.

“Well your having me around them” Raeann reasoned.

“Yes but you’ll be married, to thier commander. Most men arn’t stupid enough to chase a woman like that.” Thomas explained, “She’s young and single and I just think it might be a recipe for disaster”.

“Are you suggesting she doesn’t know how to conduct herself?” Raeann asked.

“Not at all, I just think garrison of hormonal young men and a pretty, live in housekeeper might cause a few problems”.

Raeann glared indignantly “ Well I insist, if you want me living here you’ll bring Holly too”.

Thomas sighed, “Ok I’ll talk to your father, but im really not sure its a good idea”.

This entry was posted in Orrick Vaux, Raeanne Vaux. Bookmark the permalink.

5 responses to “Thomas show’s Raeann around.”