Taye sat opposite Albert at the dinner table, the couple had settled well it, neither of them under an illusions that the marriage was of anything but of convenience. Taye had grown quite fond of the doddering old man who had become her husband, you wouldn’t have called it love in the romantic sense of the word but there was defiantly an affection.

A couple of weeks previous Albert had received a letter from his son Bran, it wasn’t anything urgent just a friendly hello, to tell him how things where going and also telling him of his intention to ask for king henrys daughters hand in marriage.

Since the letter arrived Taye found her mind wandering more and more frequently of the changes that would occur about the house with Alberts son and daughter, they where both a number of years older than Taye and she was worried about the response she would get.

Laura Alberts oldest daughter still lived here in Grimstead and hadn’t been at all amused by the introduction of Taye as Alberts new wife. She’d made it perfectly clear she thought the idea ridiculous.

Although if things went to plan Brianna would move straight in with her new husband, as the rightful heir Bran would move back to the family home.

“Albert” she said “ what’s going to happen when Bran comes home next year?, I’ve been thinking about it often and Im just not sure how we are going to manage?” 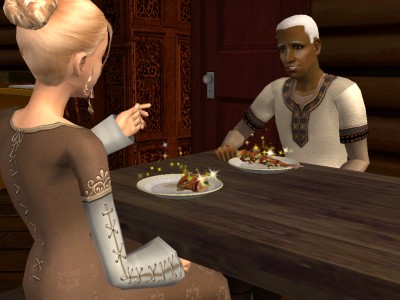 Albert looked up from his plate “ what ever do you mean?”

“Well if Henry gives Bran permission to marry Princess Abagael, then she’d be moving in here with us, wouldn’t she?? “ she asked a bit unsure.

Albert played with the food on his plate “ I guess so, why is that a problem?”

“Well not really for me, but it just strikes me that we live in a two room cabin, you have your bed in the basement, I’m in the loft and Im just not sure where we plan to put them both”.  Albert Shrugged “ I guess we will have to convert the living area into a bedroom for them both”.  “ I’m not sure that’s quite the living arrangements the princess is likely to be used to, living in a converted living room, besides what happens when both families start having children do you propose we stick the baby’s on the roof?”

Albert chuckled, but as her statement sunk in her realised she said ‘both’ families “ Erm both families?” he said raising an eye brow.

Taye nodded swallowing another mouthful of food, “Well I would image the princess is expecting children and I always assumed I’d have ….. “ her voice trailed off. Taye smiled nervously “ Im not in any rush or anything “.

Albert sighed “ I was waiting for this. I knew at some point you’d realise what you’d gotten yourself into. I’ve had my children Taye, I don’t want anymore I was looking forward to a quiet life”.

Taye battled back the tears “ but it wont be quiet, not with Bran and his kids.. what difference does it make there will be kids In the house does it really matter if they are your children or grandchildren they will disrupt your peace all the same”.

“Also children would mean…well you know we’d have too? you prepared for that?” he asked the young girl.

Taye bite her lip and nodded, the prospect no longer scared her the way it once had granted it didn’t appeal to the girl either, but if it was a means to an end she was willing, “ Just one Albert, just let me have one and ill never bother you again”.

Albert sighed “ let me think about it, but your right where going to need a bigger house”.

This entry was posted in Albert Howard, Taye Gawen. Bookmark the permalink.

2 responses to “Just One”