They had been at university for almost 2 years. The time had past quickly and they where all settling in well, after the incident in Jaedyn’s room the girls had don’t these best to avoid peter, and he did his best to avoid the girls.

It was early evening and Abagail headed to her sisters room to ask about their term paper as she reached the door she could hear Jaedyn crying from within. Abagael knocked lightly and when there was no answer she cautiously opened the door. Jaedyn was face down on her bed in tears. “ What’s up Jae ?” she asked taking a seat next to her sister.

Jeadyn turned onto her back and thrust a letter in Abagaels direction; taking the letter Abagael read the letter it was addressed to the pair from their father.  Scanning the letter Abagael still didn’t understand.  “What’s the matter? She asked again “ I can’t see anything would make you cry, in fact it says that Gabriels being sent over on the boat bringing some more students from Grimstead, surely that’s a good thing it will give you chance to meet him”

Abagael shook her head “ don’t you want to meet him you are betrothed after all, surely its better to meet him now you’ll know what to expect now. Besides it will give you a face to dream about”.She said grinning.

Jaedyn looked up “ I do want to meet him, just not now. Look at me Abby I’m fat and ugly I was hoping to at least shift some of this weight before I met him and he’s arriving in 2 weeks”

Suddenly Abagael understood since the incident with Peter Jaedyns already fragile confidence had been shattered, if anything Jaedyn had gained weight rather than lost it. “ don’t be silly Jae your georgous just like me” she grinned. “ besides as no-one can tell us apart. Are you saying im fat ?” sticking her tounge out at her sister. 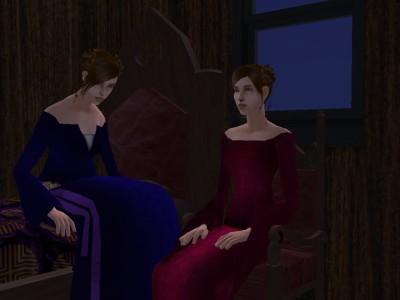 “No Abby you’ve got it all wrong” she said sitting up. “ Once people couldn’t tell us apart. These days there’s a whole barrel of fat between us”.  “ You’re being silly “

“ No Im not !!!  Just yesterday I heard two girls talking about us. One was saying how they couldn’t tell us apart and the other one just laughed and said it was easy I was the chubby one.”

“ Look Im not going to argue with you “ Abagail said exasperated “ So what if you are a little chubbier, some men like that. Im sure there must be a good reason why our father paired you up with Gabriel rather than me, he must have known you where more compatible”

Jaedyn wasn’t convinced “ Gabriel’s going to take one look at me, jump back on the boat to Grimstead and ask to swap to the identical slimmer, sleeker model”.

This entry was posted in Abagael Silverhand, Jaedyn Silverhand and tagged September 1027. Bookmark the permalink.

One response to “Slimmer Model”